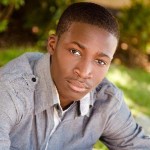 Sterling Thomas has been waiting more than two years to take a shower independently. He was a freshman in college when he was injured in a football game in October, 2012 and lost movement below the waist. After undergoing surgery in a hospital in Oklahoma, his home state, Sterling was transferred to Shepherd Center Spinal Cord Injury Program in Atlanta. It was here that his mother, Sharon, first learned about the Travis Roy Foundation.

“At the Shepherd Center, they gave us a lot of literature [on spinal cord injuries] and TRF was in it,” Sharon says. Neither Sharon nor Sterling knew much about Travis’ injury, but they have since seen his story on ESPN and on the TRF website. This past March, the TRF awarded Sterling an adaptive equipment grant for $2,467 for the purchase of a shower chair, so that he can “perform his personal care with greater independence and dignity,” as Sharon says.

With home renovations still in the works, Sterling just received his shower chair.  He was able to use it for the first time last week and it was wonderful for him!  Sterling says he has been living in the family’s living room, which is a huge intersection in the house, and he can’t wait to get back to having privacy in his own room. “It’s going to be really nice to be able to take a shower, and get in and out of it by myself,” Sterling says. “I should be able to do that completely on my own.”

In the meantime, Sterling is going through strenuous training every week, and taking online classes at night to work toward his business degree. He also does water therapy, thanks to someone in Sterling’s hometown who very generously offered up his pool. “I’m feeling really good, I got a lot of movement back, but not as much as I want,” Sterling says. “He has progressed a lot. He does have some movement in his legs now and he can move his foot up and down on command,” says Sharon, who resigned as a registered physical therapist to care for Sterling at home. “I have faith he is going to gain even more [movement], and it is a blessing that he is doing as well as he is.”

Sterling and his family have so many communities and organizations to thank for the outpouring of support and fundraising after Sterling’s injury, including the TRF. As for his future, Sterling says, “I just try to keep going and keep the faith.”