On September 24, 2015, Ben Damon was a passenger in his friend’s car as they began a one hour drive from Fryeburg to Portland, Maine. Not long after they started the vehicle struck a moose, compressing the roof of the car by over a foot. With Damon being 6-foot-6, the compressing of the roof caused him to break his fifth and sixth vertebra. With the use of the Jaws of Life, he was removed from the car and quickly life-flighted to Central Maine Medical Center. Ben’s injury sadly left him a quadriplegic.

“There’s no use feeling sorry for yourself,” said Damon, 23, shortly after his accident. “I broke my neck. It didn’t work too well to hit a moose.”

Ben and his family have faced the situation head-on. After spending over a month in the ICU in Maine, he was transferred to Spaulding Rehabilitation Hospital in Boston. It was there that he had a chance to meet Travis Roy.

“It is always extremely difficult to go into the hospital and meet a recently paralyzed person and their family,” said Roy, adding, “You can immediately see the devastation in their eyes and how scared they are of the situation.”

Roy has learned that you can’t go in and tell the SCI survivor that everything is going to be all right, because they are not ready to hear that so soon after the injury. He believes there needs to be a period for mourning the losses, then a few months down the road it’s important to turn the corner and move on. It is then that Roy prefers to go to the hospital and show by example that things will work out. 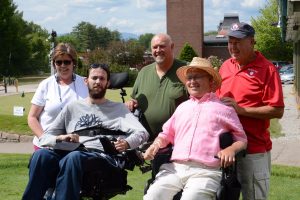 Ben Damon and his parents with Travis and Lee Roy at the 2016 Merlino’s Golf Tournament.

“By just rolling into a [rehab] hospital room and presenting myself with a measure of physical and emotional strength, people are slowly reassured that things will work out,” added Roy. Through a 10-minute conversation the families and survivors start to learn there are still endless possibilities to living a quality life, even when paralyzed.”

During the spring 2016, Travis visited with Ben at both Spaulding and during his time at New England Rehab, and has formed a friendship with Damon and his family. Damon came to North Conway, N.H. in June for the Merlino’s Golf Tournament that benefits the Travis Roy Foundation.

“It was great to finally see Ben outside of a rehab facility,” said Roy. “It’s impressive how far he has come and his attitude is remarkable.”

“I am very, very lucky to be where I am,” said Damon. “This is not something that anyone can prepare for, and it could happen to anyone. But I am very, very fortunate and grateful to have my family and friends.”

The Travis Roy Foundation provided Damon with a financial grant to purchase a special medical bed and a ceiling lift to help transfer him from his bed to his wheelchair.

Ben Damon is a perfect example of why the Travis Roy Foundation is needed. The transition from able-bodied to paralyzed is devastating, but with good family, friends, and the appropriate adaptive equipment, life is very much worth living. At the same time, hope for a breakthrough in research is critical to maintaining a positive attitude when dealing with paralysis. Through the research funded by the Travis Roy Foundation, this helps to make “hope” a little more tangible.