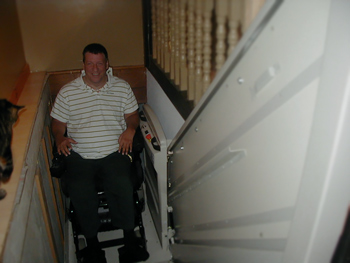 Everyday Brian Irish wakes up at 4:30 in the morning and goes to work in his basement: melting down the wax, mixing in the color and scented oil, placing the wicks in position, and pouring it all into the jars.  He will take an occasional coffee or meal break, but after that, it is right back to work for Irish!  Ask him what he dreamed of doing over 20 years ago and it most likely would not have been making candles in his Colchester, VT home, but nonetheless he is proud.  Everything is done by hand, by himself, from his wheelchair.

In 1985, at the age of 21, Brian was involved in a car accident that left him a quadriplegic.  At that time, he had earned his Associates Degree in Computer Science, but the competition in that field was fierce.  Slowly, but surely, his technological business dwindled.  From there, he began with only five scents and a desire to make little gifts for family and friends.  Overtime, and through trial and error, it grew into a lucrative thirty-three scent candle business and a way of life.  Thus, Irish Candle was born.

Vermont Pine, Vermont Apple Pie, and Lilac are his best sellers.  With over thirty different scents and jar sizes ranging from 8, 10, and 16 ounces, Irish mostly gets his inspiration from people’s requests.  Irish’s other discoveries come from his surroundings, including his personal favorite, Plumeria, a Hawaiian flower.  “The idea for the Plumeria candle came to me while cleaning the dishes with Ajax,” he explained.  “It so fresh and reminded me of a spring day!”

All of Irish’s candle scents are true to their smell, too.  “I make my candles with lots of oil, so the smell takes over the room and stays there longer than most candles.”  He recently even started a new line: 3 wick pillar candles.  While 3 wick pillar candles burn for a long amount of time (usually a couple months), Irish has created his to last for about a month.  This allows the buyer the chance to sample a few different scents, rather than get sick of one for such a long period of time.  Still his favorite part of candle making is “seeing the look on the customer’s face and seeing them truly happy with the candle and its scent.”

When not making candles, Brian enjoys biking on a local trail.  “I try to do about six miles a day,” he said, describing his 3-wheel bicycle.  “It keeps me strong and makes me feel good.”  Although not in the computer business anymore, Brian will still take care of his family and friend’s computers for repairs every now and then.

As for the future of Irish Candle, Irish is hoping to gain popularity for his candles, outside of his circle of family and friends and local events where he sells and donates them.  He is beginning to do so with the help of his website, www.irishcandle.com, where anyone can learn more about his business and buy the candles.  Irish also hopes to get a distributor, expand his line, and have his candles sold in stores.  “Watch out Yankee Candles,” he joked.

Irish received a $13,332 grant from the Travis Roy Foundation for a wheelchair lift in his house in the fall of 2009.  “Before I had my wheelchair lift, I could not go downstairs to make my candles, do my laundry and so on; I would have to have someone come in and help me. It was a barrier,” said Irish.  “Being put in a wheelchair was one barrier in life.  Not having full access around my house was another.  I conquered the first one. The Travis Roy Foundation helped me conquer the other and I am so thankful.”

As Brian enjoys helping out causes he believes in, he will be donating his 3 wick candles for the upcoming Annual Vermont Wiffle Ball Tournament to benefit Travis Roy Foundation.  “For anyone who donates at least $5, their name will go into a drawing to win,” Brian explained.  “There will be several winners throughout the tournament.”  Brian has been working hard for the past three months, aiming to make over twenty candles a day for the Wiffle Ball Tournament.  His scent of choice for the event?  “Vermont Apple Pie of course!” he said.  “Because nothing goes better with baseball than some apple pie!”