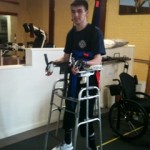 Christopher O’Brien woke up on July 27, 2011 never knowing that his life was about to change.  He was in Block Island, RI on vacation relishing the fresh air and blue skies.  He decided to go swimming and as he admired the ebb and flow of the water he decided to dive into a wave.  The water was shallow, and, tragically the next thing Chris felt, was stinging numbness.  The dive proved to be the instance that caused Chris’s life to continually move towards change, much like the water.  He was air lifted to Rhode Island Hospital.

The hospital confirmed that Chris broke his neck at C4 and C5.   After 2 weeks his health improved to the point where he could withstand surgery.  He waited at RI Hospital for five weeks and was able to transfer to Gaylord Rehab Center in Connecticut, where he worked strenuously to gain movement and attain independence.  On September 18 Chris posted on his Facebook page “Controlled movement in one finger!  I can now rock the iPad. Hello world!”  Despite the hardships caused by his spinal cord injury Chris kept a positive attitude and took solace in knowing that moving a finger was worth celebrating.

Life is different for Chris and he is slowly adjusting to his disability.  When asked what his biggest day-to-day struggle was he stated, “It’s difficult not being able to use my fingers.”  Quadriplegia affects finger functioning, which makes simple activities extremely challenging.  Although daily life tests Chris’ limits he enjoys OT and PT.  He loves seeing progress, which motivates him to work harder.

Despite having limited finger movement Chris is pushing a manual wheelchair, which he is most proud of.  Making life easier all the while being independent is Chris’ goal in regards to his disability.  Luckily, when Chris was at Gaylord Rehab a therapist told him about the Travis Roy Foundation.  He applied for a grant and he was able to purchase a device that allows him to turn on the TV, and change the channels using his knuckles instead of his fingers.  Chris takes pride in the fact that he is doing it on his own.