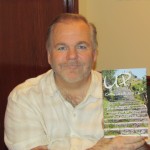 During Christmas 1979, Brian Swift considered himself to be fortunate in many ways. A seventeen year old high school senior who had been blessed with a loving circle of family and friends, Brian looked forward to what the future would bring. Little did he know that he would soon be set on a very unexpected path.

An impromptu football game was what sent Brian’s life into a tailspin on the day after Christmas 1979. What began as an opportunity to enjoy some fresh air with friends ended abruptly after Brian was tackled, fell to the ground and found himself unable to get up. As his friends stood around him silenced and stunned, Brian knew that his life had permanently changed: “I knew right then and there that I was paralyzed.”

Brian was rushed to a nearby hospital where he spent a week being stabilized and undergoing tests . It was soon determined that Brian’s injury had rendered him a C6 quadriplegic.  He was then admitted into the Rehabilitation Institute of Chicago. He spent three months there working hard to accept and adapt to the outcome of his injury. “The medical staff was direct” Brian explains, “and I was grateful for that. It made me work harder.”  Because he had limited movement in his wrist and fingers, Brian began to lift hand weights to gain strength. He also worked tirelessly with his occupational and physical therapists to achieve goals such as feeding himself and operating a manual wheelchair.

Once he completed his rehabilitation, Brian decided to finish high school and continue his education: ” I had been raised in a blue collar family. I was expected to go into the trades once I finished high school.  My injury forced me to go in a different direction.” For Brian, that direction brought him to Saint Xavier University where his earned a degree in Criminal Justice. He then went on to DePaul where he became a lawyer. He credits his family and, especially, his friends for literally “carrying him through” college. “Back then, many buildings were not as accessible as they are today. My buddies would lift me and my wheelchair and take me wherever I needed to go.”

It was during his time in college that he began to date a young lady named Monica. With a laugh, Brian simply says, “I liked her and she liked me.” Eventually, his college sweetheart became his wife.  Sons Spencer and Calaghan along with daughter Sydney would complete the family.

While building his family, Brian also built a career in sales and management. He explains, “I’ve always enjoyed helping others get from point A to point B”. These aspirations have also transferred well into volunteer settings, ” I have coached youth football and basketball. I may not be able to show the players what to do physically but I can teach them about inner strength. That will carry them beyond the field or court.”

Despite all of his success, however, Brian had one more goal to accomplish: to write a book chronicling his injury, rehabilitation and his life today.  “I wanted to write a book but the family computer was on its last legs. It was an older model…and having to share it with three teenagers wasn’t working out too well.”  The Travis Roy Foundation responded to this need with a grant that allowed Brian to purchase a Mac Book.

Today, Brian is extremely pleased with his new computer. “It is absolutely wonderful,” he says, “I was able to write my book Up-Getting Up Is The Key To Life (now available through Amazon).  A publishing firm in Colorado liked what I submitted and now I’ve written a book that will hopefully inspire others.” he goes on to express appreciation for how the Travis Roy Foundation helped him fulfill a dream. “What the Travis Roy Foundation does touches so many…those living with an SCI, their caregivers, family, friends…it has given me an opportunity to share my story and, hopefully, show others in similar situations that they can find happiness in their own lives, too.”