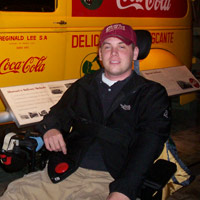 At 23, the Swanton, Vermont resident was starting a new phase of life. Having just received his commercial driver’s license, Pion started a job with Coca-Cola. His girlfriend had recently graduated from college and they were getting ready to start their lives together – looking to buy a house and becoming the proud parents of an adorable puppy, Eli.

These plans changed in August of 2008, when Pion dove into a friend’s above ground pool, injuring his spinal cord and becoming paralysed from the chest down.

Pion’s life as he knew it came crashing down. While he was in the hospital, one of his colleagues contacted the Travis Roy Foundation.

Travis went to visit Dan and shared his experience and advice. “The most important part of putting your life back together after a spinal cord injury is going to a facility that will help you find your maximum independence and prevent long-term medical complications,” shared Roy. “The Shepherd Center in Atlanta is one of the premier spinal cord rehab centers in the country.”

Pion’s insurance was willing to pay for him to go to any rehab center in the country, but they would not pay for his transportation down there. He received a $5,900 grant from the Travis Roy Foundation to cover half the cost of his medevac flight to Atlanta. In Atlanta, Pion was supported by people with the right background, made friends with similar injuries, and learned how to get out in the community.

The mental journey has been difficult. “At first, I knew what happened, but it wasn’t real. It wasn’t real until I went to Atlanta and saw everyone with injuries like me, that I realised I wasn’t going to get better,” Pion said. “This wasn’t like a broken leg.” He also struggles adapting to a new lifestyle where he is not able to do all the things he wants to do and has to stick to a schedule dependent on caretakers.

Finding funding for adaptive equipment and medical expenses is a continual challenge. “There are not many opportunities to find funding and eligibility tends to be limited,” Pion said. Donations made to the Travis Roy Foundation make a big difference. “Every little bit helps and it means so much to be able to count on financial support when you really need it.”

Day-by-day, Pion is adapting to his new lifestyle and becoming increasingly independent. Before the accident, Pion enjoyed sports and he hopes to once again become active through the New England Disabled Athletics Association. “Eventually,” says Pion, “my goal is to become independent enough to live on my own, drive, and play sports again.”