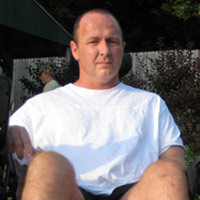 On February 23, 2009 Eric Williamson was driving home from a birthday party.  It was late at night, and there was a terrible snow storm.  The darkness and icy streets were two ingredients that equaled disaster.  Eric’s Jeep Cherokee slid off the road and flipped over.  The Jeep landed in a ravine, a niche away from the road.  He was thrown from his seat and lay in the frigid cold hoping someone would find him.  Alone and badly injured, Eric’s survival mode kicked in motivating him to dig and claw through the icy sludge…to no avail.  Eric, exhausted and slowly losing consciousness, felt himself letting go…going toward the pull of sleep.  Fortunately, the driver of a state road snow plow glanced down the side of the road and spotted Eric’s jeep.

During the ambulance ride Eric had to be revived three times.  Eric reported that the doctors, EMS, and police officers were amazed that he was not completely crushed in half by the accident.  Eric’s body-building stature proved to be the catalyst in which saved his almost fallen life.  Despite his Herculean figure, his ribs and collar bone were broken, his left lung collapsed, and his t8 and t9 thoracic vertebrae were shattered.  Eric stated “Even though I was hurt pretty bad I struggled with the emotional aspect rather than the physical obstacles.”

On a daily basis Eric finds himself trying to push through the adversity that nudged its way into his life.  He is deeply grateful for the relationship he has with his 12 year old son, Shawn.  Although transitioning to his new lifestyle has been tough Eric still looks forward to spending time with his son.  In fact, Eric stated “the one thing I am most proud of since my injury, and even before my injury, is Shawn.  I love him with all my heart and have always been proud of him.  Now though, I am beaming with pride because he has handled my injuries with far greater strength than I could ever have imagined.”

Besides fostering his relationship with Shawn, Eric enjoys visits from friends and family.   Like most individuals with spinal cord injuries it is comforting to have support during such dramatic changes.  Eric looks forward to visits from his mother, and is deeply grateful for her unwavering support.  Not only has the dynamics in Eric’s relationships changed, his view on life has broadened.  Eric reported that he can now see that he was far too materialistic and cared about things that didn’t really matter before his accident.

One thing that did matter to Eric was being independent.  It is always an empowering   feeling when equipment can help individuals with disabilities reach their full potential.  And in Eric’s case, this mantra rings loudly.  He genuinely remarked “I am grateful for any and all of the assistive equipment that I have been able to get.  It has made a positive difference in my life.  Helping to keep me as healthy as possible is one of the biggest things the equipment has done for me.  I’m once again able to enter and exit my vehicle with much greater ease and once again drive wherever I need to go.”

Eric is elated to have the technological resources such as the internet where he read about the Travis Roy Foundation’s mission and the incredulous work it does with individuals with spinal cord injuries.  Eric Williamson’s story illustrates the importance of obtaining equipment that enhances independence for individuals with disabilities.  Thankfully, the Travis Roy Foundation is able to reach the world, and change it.