‘The Best Weekend of the Year’

ESSEX, Vt. — One of top late-summer events in the Green Mountain State, the 20th annual Travis Roy Foundation WIFFLE Ball Tournament, returns to action on August 13-15, 2021 (Friday-Sunday) in Essex, Vermont. The 32-team tourney nicknamed the ‘Best Weekend of The Year’ will take place at Little Fenway, Little Wrigley and Little Field of Dreams, quarter-scale replicas of the three iconic ballparks. The event is open to the public and admission is free.

All proceeds go to the foundation founded by Roy, the former Boston University hockey player, and his family who spend each summer in nearby Malletts Bay on Lake Champlain. The foundation benefits people and families affected by spinal cord injuries.

The tournament opens at 5:30 p.m. on Friday afternoon, August 13 with opening ceremonies at Little Fenway with the annual Celebrities-Sponsor game at 5:30 p.m. The list of celebrities will be announced closer to the tournament.

Friday night also features games at all three field starting at 6 p.m. In addition to a full slate of action, Saturday features the annual Money Count Ceremony at 2:30 p.m. and the tournament runs through Sunday capped by the playoffs and championship game on Sunday afternoon. The 32 teams are filled for the tourney but in addition to the action on the field, many other events will be held throughout the weekend including a silent auction, many raffles, great food, a free kid’s WIFFLE ball game. Also on Saturday are a pair of Scooter’s Pretzels Home Run Derbys that are open to the public for a donation.

Pat O’Connor created Little Fenway in his backyard in Essex in 2001, and due to the success of this fundraiser, added Little Wrigley and Little Field of Dreams. He and his wife, Beth, founded the tourney in 2002 and have been gracious hosts.

Sponsor the tournament and support the TRF.

Make a Donation at the Tournament Fundraising Site

Watch Highlights of 2020 Virtual WIFFLE on our YouTube Channel

The tournament was different than the traditional format that usually takes place at Little Fenway, Little Wrigley and Little Field of Dreams in Essex, Vermont yet the 2020 edition raised $325,309 (as of 8-10-20), a very impressive figure during a pandemic. Over the tournament’s 19-year history it has raised over $6.4 million dollars.

All funds go to the Travis Roy Foundation that benefits and creates awareness for people with spinal cord injuries, and is named after the former Boston University men’s hockey player who resides in nearby Mallets Bay in Colchester each summer.

‘What a fun week we had,’ said Roy in his remarks Sunday in the annual money count announcement broadcast live on Pack Network (VIEW HERE). ‘I’m feeling a lump in my throat hearing all the familiar voices online all week since this tournament captures all your senses. It’s been sad not seeing everyone this year but I can’t thank everyone for making the most of it.’

‘The payoff for all the hard work all year fundraising and getting teams together is coming to Vermont to celebrate the weekend and feel the magic,’ added Roy. ‘We’re missing you greatly but the fact is we raised over $300,000 in the middle of a pandemic. Now we have this money to continue our research, issue our grants, and most importantly help individuals and families in need. What you guys have done to rally your teams and raise that kind of money to help us is exciting and is a huge relief. Thank you very much to all involved.’

Roy also acknowledged the impact of this summer’s TRF WIFFLE Ball Challenge, where many have participated by taking a swing with an official WIFFLE bat and ball, and posted their videos and challenges on social media (#BatterUpTRF).

‘Also thanks to those who participated in the TRF WIFFLE Ball Challenge,’ said Roy. ‘That too has raised some money but more than ever we raised awareness to our cause, and a lot of people had a lot of fun.’

The challenge, and donations for it, continues through the month of August with close to 300 so far participating, near the number who usually play in the traditional tournament.

In addition to Sunday’s money count was a conversation with former Sports Illustrated senior writer, E.M. Swift, co-author with Travis Roy of the best selling book, ‘Eleven Seconds: A Story of Tragedy, Courage and Triumph’, that was the inspiration for Little Fenway founder Pat O’Connor starting the tournament in 2002. All of Sunday’s presentations can be viewed on the tournament’s YouTube channel (link above).

Along with the virtual presentations, replays of the last 10 title games and highlights from all 30-plus teams, an online silent auction, and a simulated tournament on the video game ‘MLB: The Show 2020’ was held.  The E60: Buzz Unit held off The Point in Sunday’s thrilling championship game.

ESSEX, VT –  A record-shattering fundraising effort that exceeded the previous mark by over $100,000 as well as great fun and competitive action on the field highlighted the 18th annual Travis Roy Foundation WIFFLE Ball Tournament that was held this past weekend, August 9-11, 2019 at Little Fenway, Little Wrigley and Little Field of Dreams in Essex, Vermont.

The 32-team event raised a staggering $745,000 topping the previous high set of $617,634 last year to lift the 18-year total to just under $6 million. It also is the fifth time in the last six years the Vermont backyard event has brought in well over a half-million dollars.

All funds go to the Travis Roy Foundation that benefits and creates awareness for people with spinal cord injuries, and is named after the former Boston University men’s hockey player who resides with his family in nearby Mallets Bay in Colchester each summer.

‘It’s so incredible what goes on here,18 years we have been doing this. There are so many pieces to the puzzle and stories of the magic that goes on here,’ said Roy in giving thanks to all involved at the money count announcement at Little Fenway on Saturday.

‘We are in a ‘cow field’ in Essex, Vermont, not in Manhattan, raising $700,000, just about $6 million. The numbers are staggering and I hope you feel this when I say it, it’s because of all of you. You get excited about the WIFFLE ball and holding that yellow bat in your hands but you also have a pride in how you care about what we are doing here, and have that hope for a better day. You guys give me and all of us that are dealing with paralysis the energy to know that people want to see that better day and it also leads to the research and the funding we need. Thanks to everyone involved in raising the money and putting on this fantastic event. It’s because of you, the people who have been coming year after year, that we have this hope for a better life. I truly would like to thank everyone that’s part of this great family.’

The tournament is played annually on the three quarter-scale replicas of three of the nation’s iconic ballparks developed by tournament founders Pat and Beth O’Connor, now maintained by the Travis Roy Foundation

The action on the field was highlighted by HOTDAM, one of the seven original teams out of Williston, VT, capturing its fourth championship defeating the Juggernauts of Rutland, VT in the title game. HOTDAM’s John Lenhart of Bayside, NY, a long-time participant, was named tournament MVP. Other exceptional performances on the field included the tournament’s first no-hitter tossed by Cougar Nation’s Keith Carter of Underhill, VT.

Others recognized with annual awards were Will Sleeper of Wellesley, MA and the Boston Terriers earning the Tommy Long Sportsmanship Award and Saul Skrocki of Cougar Nation and South Burlington, VT earned the Kim Trahan Fundraising Leadership Award.  By raising just under $60,000, the Hardshells of Maine, boyhood friends of Travis Roy’s from Yarmouth, Maine, won the Fan Club Award as the top fundraising team. Also with over $50,000 this year, the Boston Beef were recognized for going over the one-million-dollar mark in its 18 years participating in the tourney. A pair of longtime tournament organizers, Tim Gendron of Essex Junction, VT and Bruce Bosley of South Burlington, were inducted into the Little Fenway Hall of Fame for their years of exemplary volunteer service. 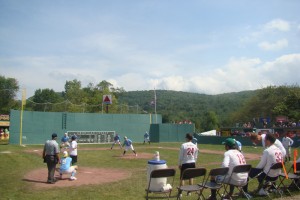 Between games at the Travis Roy Foundation WIFFLE Ball Tournament, a favorite pastime is to peruse the Silent Auction tent and make a bid on an item or three.  Thanks…

2020 Tournament Simulation on MLB The Show

When we started 19 years ago who would have believed that our beloved WIFFLE Ball tournament could be simulated and broadcast for all to see? Through MLB The Show and…

Thank You To All Our Generous Sponsors