“I am so grateful for the grant money provided by the Travis Roy Foundation…the lift has changed my life!”

On August 8th 2007 Mark Hall woke up thinking it was going to be just another average day. A change was set in motion as Mark slept in the back of his truck while his co-worker drove. Unfortunately, the co-worker dozed off causing the truck to veer off the freeway and slam into a three foot wall. The vehicle continued to move until it jumped over a 30 foot deep wash and flipped until its momentum was stopped by a tree. Mark was ejected from the truck.

When Mark arrived at the hospital he was badly hurt. Doctors reported that Mark broke his neck at C4, 5, and 6…a complete injury. Besides his devastating neck injury, Mark suffered a broken back, fractured ribs, a collapsed lung, and a crushed pelvis. His injures were critical but his paralysis was a daunting and grim diagnosis, one that shook Mark’s family and friends. 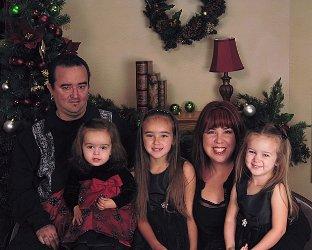 Mark’s recovery was intense and long. He credits his wife, Keleigh whom he describes as his rock, as his biggest asset. Mark states, “Keleigh has taken on numerous roles as the dynamics in my family have shifted. Before my accident I was the one who worked and provided for our family. She is now responsible for literally everything regarding our family.” Luckily for Mark, Keleigh and his three beautiful daughters, Raven, Willow, and Lily inspire him to work hard in his recovery efforts.

Mark is committed to his recovery and tries to keep a positive attitude although the wear and tear of relying on others has affected his emotional well being. One of his biggest limitations was finding reasonable and accessible transportation. Before the Halls heard about the Travis Roy Foundation, Mark was being transferred into cars by family, friends, and neighbors. Not exactly the best way to live a spontaneous life but for Mark it was the only functional and practical way. Due to the inconvenience of travel Mark and his family were discouraged and rarely got to experience fun stuff away from the house.

When the Halls heard about the TAS LIFT their hopes lifted. There was only one downfall…MONEY. Viable options for this lift were slim to none. It seemed that Mark’s family would have to cross their fingers and start playing the lottery. Fortunately, a friend told Mark’s family about the Travis Roy Foundation, and the TAS LIFT became more than just an abstraction.

Mark received a grant for $7,000 to purchase the sling, which increases independence for individuals who have mobility impairments. Since the TAS LIFT was installed, Mark and Keleigh were able to have a date night with dinner and a movie. Mark has not missed a dance recital, an open house or school function since the TRF purchased the TAS LIFT for him.

“The feeling of being independent is priceless. Grants allotted to spinal cord injury survivors are somewhat rare. The Travis Roy Foundation helps S.C.I. survivors and their families achieve independence I am so grateful for the grant money provided by the TRF…the lift has changed my life!”

To learn more about Mark’s journey check out his blog at WWW.MARKHALLINFO.BLOGSPOT.COM