Bryce Rafferty was a 21 year old student enjoying a semester long study abroad program in Geneva, Switzerland when his life changed.  It was August 26, 2009 when Bryce and his family’s host son, 14-year-old Damien, decided to swim at a nearby lake.  Bryce recalls the day as gorgeous.  “It was 80°, sunny…the most beautiful place I had ever been with the Alps and Mont Blanc clearly visible across the lake.”  Bryce also noticed a group of teenagers diving off a pier that was about 40 yards off the shore.  He delighted in the prospect of experiencing something new so he dove off the pier. 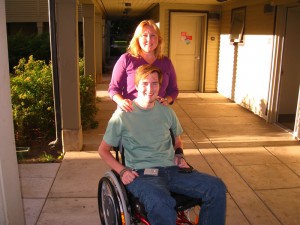 The water was shallow and as Bryce felt the water against his skin he also felt his head hit the bottom of the lake.  Bryce remarked about how he sensed the transformation of his body “I was paralyzed instantly when my head hit at the bottom of the lake.  I felt a kind of electric sensation that pulsed through my body and then shorted out.  I was paralyzed instantly.”

Bryce was face down on the surface of the lake due to being unable to flip his body over.  Luckily, Damien and his friends carried his limp body to shore.  That Sunday afternoon Bryce’s life was turned upside down.  Being paralyzed meant day-to-day changes and burdensome struggles that marked an endless road of uncertainty.  Bryce reports that life is moving along although many simple tasks are now extremely difficult.  Bryce stated “simply being back at school is hard especially seeing all my friends, and imagining what life should be like for me…what would I be doing had I not broken my neck.  I feel like I can’t have the kind of relationships I want to have with the people I know, and it’s hard with the vast sea of new people who only know me as Bryce, the guy in the chair.”

With Bryce’s injury being new, he is limited in terms of what he can do physically.  He finds this aspect of being disabled unhealthy but believes staying focused by taking each day one at a time is the mindset he needs to adopt to cope right now.  Although his daily difficulties can be overwhelming he does have big goals for his future.  In fact, Bryce is back to school, making the grades, and he is proud of his dedication to getting his work done.

Bryce is adapting to his new lifestyle and through the funds donated from the Travis Roy Foundation he purchased a commode/shower chair.  Bryce expressed his gratitude by stating “It’s working great. The chair makes it easy to get my morning regimen done, and it is a quality piece.”  Bryce heard about Travis’s story while he was in the hospital in Switzerland, and Denver.  He stated “As upsetting as it was to hear about what happened to Travis, I have to say we were injured in similar phases of our life, and it’s good to know that I’m not alone in the fight.”  Individuals with spinal cord injuries know that inspiration and support are positive determinants in one’s recovery.  Thanks to Travis Roy whose grants and personal story helped Bryce gain a bit of independence, and motivation for a better future.