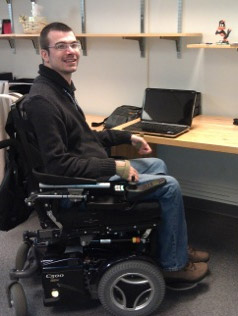 Escaping the Pennsylvania winter to sand, sun and relaxation in the Bahamas, sounds like the perfect spring break for any college student. In March of 2005, Jeromie was enjoying the beaches for a week with his fraternity brothers. A college Junior, Jeromie was studying Mathematics and Economics at Lafayette College and had aspirations to work in finance after graduation. However, his life would be forever changed when he dove into the ocean waters and, on impact, broke vertebrae causing instant paralysis and nearly drowning.

It took over 12 hours for Jeromie to be air-lifted to a hospital in Miami for medical treatment. After arriving in Miami, complications arose when the salt water in his lungs caused his lungs to collapse, requiring intubation and two months in the Intensive Care Unit. He then spent the following 2 months in rehabilitation until he was stable enough to be transported to Magee Rehabilitation Hospital in Philadelphia, closer to his family and friends.

In fall of 2005, Jeromie was discharged from Magee Hospital and moved to his hometown of Huntingdon, Pennsylvania. As a quadriplegic, paralyzed from the shoulders down, Jeromie had much to learn about his new condition while struggling through a variety of medical issues. “The next few years were bumpy,” recalls Jeromie. “I would take the proverbial two steps forward and one step back.” However he kept focused on three key things he wanted to achieve:

The community in Huntingdon was very supportive and Jeromie eased back into academics by taking some courses at a local college. He also became engaged with the disability community due to his frustrations with the “system.” This led to his appointment to the Governor’s Advisory Committee for People with Disabilities in 2007. By 2009, he still had one year left to complete his Math and Economics degree and he re-enrolled at Lafayette College. “Going back to Lafayette was quite a transition. It was the first time since my accident that I lived on my own, which felt great to live independently. When I rolled into the classroom in my wheelchair, I think many students were apprehensive, but after a couple weeks and once they got to know me, I think they looked passed the disability.”

In May 2010, Jeromie graduated Lafayette College and a year later, he enrolled in the Masters of Health Economics program at Johns Hopkins University, combining his passion for economics with his first-hand experience with health challenges. “I realize I have made great strides and expect to make more in the future” Jeromie reflects. “I try to put on a strong face, but many people don’t realize how difficulty a disability can be. It takes me 2 hours to get up excluding my commute, which means if I have to be on campus at 8:30 am, my attendant and I get started at 5:30 am. You also have to watch what you eat and your overall health. The good thing is that you learn great time management.”

In 2005, Jeromie received a laptop from the Pennsylvania Office of Vocational Rehab, which was critical to supporting his education goals and social integration. However, by 2011 when Jeromie began at Johns Hopkins, his laptop showed its age. It’s 10 lb. weight proved too much to sit on his lap, let alone easily carry back and forth from school on the subway. It lacked the power and speed needed to run his voice recognition software, Microsoft word, and his statistical programs for school. “It was loud, heavy, took forever to start-up, and froze up constantly” laments Jeromie. In October 2011, Jeromie received a $1,100 grant from the Travis Roy Foundation for a new computer. The new computer is much lighter, runs complex programs quickly, and has voice recognition software. “I can’t imagine where I would be without my computer,“ says Jeromie. “I wouldn’t be able to do my academic work. With the webcam and Skype, I am able to keep in touch with friends and family. The best part is that I am able to stick the computer in my bag behind my wheelchair, take it to school, and use it in class and between classes. At the apartment, I have it setup so I can just roll my wheelchair up and start talking. The internet is also a great way to find resources to support spinal cord injury survivors and has an active online spinal cord injury community.”

Looking forward, Jeromie will graduate this summer with his master’s degree and he is considering further graduate school. Long term, he would like to work in a job where he can have an impact and draw on his own experience, in roles such as health economics consulting, research, or as a professor.

“Having a spinal cord injury is life altering. I have been helped along the way by so many people. Some were friends and family, but you would be amazed at how many people are willing to help a stranger. The injury has taught me about the good nature of people and what is important in life. Without the support of friends, family, and kind strangers – like those that donate to the Travis Roy Foundation – I wouldn’t be where I am today.”