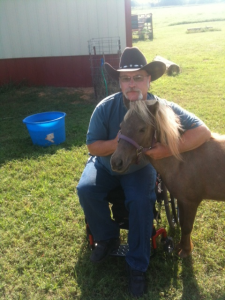 Anthony Tabor drove a truck for 26 years. It was something he did as natural as brushing his teeth. On September 10, 2012 he drove his truck as usual and delivered a load of diesel to a customer. He climbed a 15 foot tank to check the fuel level and on his way down, he fell 13 feet. With such a severe fall Anthony sustained damage to his spinal cord including his neck and back.

Anthony tries to make the best of the physical and emotional challenges that he is faced with on a daily basis. When asked what his biggest struggle was, he commented “I miss not being able to help my wife with the farm especially the chores. We had to sell cattle and horses so there are not as many livestock but chores aplenty along the pastures.”

Anthony hopes that one day he will be able to lend a helping hand on the farm. He needs various surgeries as his physical injuries from the fall were severe, and he is still healing. Even though his future is uncertain he has motivation and finds hope in his accomplishments. He enthusiastically stated “Learning to shave and dress was a milestone. After tons of therapy I stood with assistance and it felt great.”

His proudest moments don’t stop with himself. He reported that he is most proud of his wife, Markeeta. Both Anthony and his wife lost their spouses in death. He smiled as he said “She has been through so much and now dealing with me, I’m just so proud.She is my hero!”

Not only is Anthony grateful for his wife he is also thankful for the Travis Roy Foundation. After his accident he could not sleep in his bed due to being on his back, which caused him to choke. Fortunately, Markeeta found the TRF on the internet and applied for a grant to obtain an adjustable bed. Anthony happily remarked about his new bed, “It has been a blessing, a Godsend.Now, I can sleep for the most part, and not worry too much about bed sores. Thank you Travis Roy Foundation!” Once again, the TRF has made its mark on another person in need, and that’s what it’s all about.