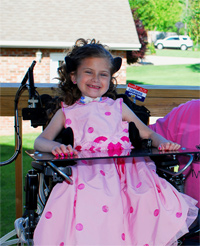 Margaret Romph was injured in a car accident five years ago.  Her sister and grandmother were with her when the accident occurred.  Margaret was dead at the scene; however, she was revived, and airlifted to the University of Missouri Hospital.  She suffered two broken legs and her neck was severely broken in two places.  Margaret sustained injuries at C-1&2, and C-6&7.  She was just five years old.

Despite the financial blow of Margaret’s injury and subsequent care, the Romph family sticks together to find normalcy and balance.  Margaret’s mother, Sherline, had to resign from her job in order to be available for Margaret full-time as well as support her other three children.  “The whole family has suffered.  Our lives as we knew them were taken away.  As far as Margaret’s care, we handle it pretty well NOW,” said Sherline when asked about the day-to-day struggles her family goes through.

“Having Margaret’s infectious smile with us everyday is a joyous reminder that she is with us,” Margaret’s mother beamed.  The family works hard to keep Margaret healthy, and they hope in the near future that the medical field will come up with something that could help her some day.  Right now, the Romphs hope to get a diaphragmatic pacer which goes on the frenetic nerve and would help Margaret breathe on her own.

Even though the Romph’s look forward to Spinal Cord Injury advances they revel in the fact that their 3 children have stepped up to the plate and help when they are needed.  Sherline stated “We are proud of how our other children have taken to this.  They have had to grow up quickly, and learn things that they should never have to know in a lifetime meaning medical training.   Also, they have learned the importance of support.  With Margaret, we are proud that she wanted to get back into cheerleading again.  In January, she got the privilege of performing with her team on stage, and it was amazing.”

The Travis Roy Foundation helped the Romph family purchase equipment that has made a difference in caring for Margaret.   A $3,000 grant covered the costs of an adjustable work table and accessories which monitors her pulse and oxygen; an ECU which lets her control her TV, lights, dvd player, etc.  To help Margaret who uses her mouth for drawing and painting, the table converts into an easel.  Sherline thankfully stated, “A lot of people have not had the opportunities to get the things they need so we are definitely blessed!  She loves her stuff and it has helped her feel somewhat independent.”