Counting your fish — and your blessings

It all started last May, over a plate of fried clams at a restaurant in the Back Bay.

Twenty-one years ago, Travis Roy was 11 seconds into his first shift for Boston University when he went down along the boards and couldn’t get up. He was 20 years old, a quadriplegic. He has spent the last two decades giving comfort to those who have suffered similar fates, raising millions for research, providing wheelchairs and other hardware to those who need to adapt after a catastrophic injury.

That night over fried clams, the three men got to talking about what they wanted to do during the summer.

“What I would really like to do,” Travis Roy said, “and what I haven’t been able to do since I got injured, is go fishing, on the ocean.”

Butterworth and Gaziano looked at each other and immediately thought the same thing: Carl Cavossa.

Cavossa, Butterworth, and Gaziano have been fishing together out of Falmouth for a quarter-century. They don’t have to be asked twice to go fishing. 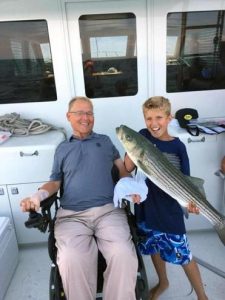 Travis Roy and Jack Butterworth with a striper they caught off Martha’s Vineyard. (Photo courtesy of John Butterworth and The Boston Globe)

Travis Roy appreciated what Gaziano and Butterworth were proposing, but he didn’t believe for a minute they’d be able to get him on a small fishing boat. There was that little matter of him being attached to a 600-pound motorized wheelchair.

But Gaziano and Butterworth knew if anybody could figure it out, it’s Carl Cavossa.

Cavossa’s business is disposal and excavating. He has the brain of an engineer and the brawn of a wrestler. He asked Roy to send him the wheelchair’s dimensions. Then he welded together a metal cage, the size of a witness box. Roy steered his wheelchair into the cage, and Cavossa used an old Army surplus crane to lift and lower him and the wheelchair onto the back of his boat, the Play Penn.

Getting Travis Roy onto the boat didn’t turn out to be the problem. Finding bait was the problem. There was a dearth of pogies. Nobody on the Cape had pogies. Cavossa explained to a couple of fishermen he needed pogies because he was bringing Travis Roy fishing.

“You mean that kid from BU?” a fisherman who goes by the nickname Hairball asked.

Hairball found 50 pogies in no time. When Cavossa tried to pay Hairball, he wouldn’t take the money. The word went out among fishermen all around Falmouth and soon Cavossa had 100 pogies. No one would take Cavossa’s money.

At the fuel dock, the guy pumping gas asked Cavossa if he could talk to Travis. The guy explained that his friend’s son had been paralyzed in an accident two weeks before. The guy huddled with Travis, who promised to help.

The boat was cruising near the Elizabeth Islands, north of Martha’s Vineyard, when Cavossa looked down from the captain’s chair to see Sam lifting a bottle to Travis Roy’s lips so he could drink some water. Nick broke up a chocolate chip cookie so Travis could eat it more easily.

Steve Gaziano had volunteered to be the chum man. He cut the pogies into bits, dropping them off the back of the boat to attract the fish. The kids clamored for jelly doughnuts, the slang for the gooey midsection of a pogie.

“I believe you,” Travis replied.

But the jelly doughnuts weren’t working. Cavossa moved the boat around, like a dog sniffing for something.

“I’ve got an idea,” he yelled down from the captain’s chair.

As the boat sped toward the Vineyard, bits of surf flew onboard, like pelting rain drops. The boys and Lee Roy took turns drying off Travis’s glasses. Cavossa stopped just west of Nomans Land, an uninhabited island off the Vineyard.

The stripers began striking immediately. With rapid succession, the kids pulled in stripers and black bass, one after another. Jack Butterworth landed a beauty, a 36-inch striper. He got it off the hook, then brought it over so Travis could feel the scales on his cheek.

Lee Roy landed a huge black bass and proudly showed it to his son.

Back at the dock, it took Cavossa two hours to fillet all the fish. The Roys headed back up to Vermont with enough fish to feed an army.

The next day, Travis Roy sent Carl Cavossa a note.

“I grew up in Maine,” he wrote, “in a town close to the ocean. We didn’t have a boat, but on occasions when I would get on a friend’s boat and out on the ocean, it was always awesome. I obviously can’t feel, can’t move, can’t do much of anything. But I can take in a moment or an experience in life like not many people can.

“Sitting in the back of the boat watching the rooster tail and the spray of the ocean is magical,’’ Roy wrote. “It reminds me of sitting next to a campfire. I can watch the flames and embers of a fire for hours. Seeing the colors and clarity of the ocean as the wake forms and then dissipates is exhilarating.’’

“Having my glasses covered with ocean spray was unexpected, one of those little things that you forget about when you haven’t been on the ocean for 20 years. Just licking the salt off my lips was a treat, a sensation, a taste I had forgotten about.”

But that wasn’t Travis Roy’s favorite part of the fishing trip.

“I’m afraid it’s probably not in the cards for me to have a son, but I’ve got the best dad in the world. The bonding that went on yesterday between father and son was special. I loved seeing each of you interact with your sons. Nature has filled your kids with your DNA, but it is your nurturing that fills their souls. Yesterday was one of those moments that will forever be ingrained in your kids, whether they realize it or not.”

Travis Roy told me that the fishing trip was a microcosm of his life since Oct. 20, 1995, when he lost so much on the ice.

His family, his friends, have given him opportunities that so many others never get.

“I have benefited from the kindness of complete strangers for the past 20 years,” he said. “No, this isn’t the life that I wanted to live. But at the same time, I am very aware of how fortunate I am. We all have our challenges. It’s important to sit back and count your blessings, too.”