Wiffle tourney in Vermont draws fans for good cause

ESSEX, Vt. — The way Travis Roy sees it, it’s hard to put into words, even after all these years of trying. Half of the reason is because there were days he never thought he’d hear cheers again, and hear all these people cheering. The other half is because of where they are, all standing in front of him in this mini-baseball wonderland, and how far he came to get here.

This weekend in Essex, a rustic town of 9,000 stemming from a single gravel road, Roy is once again serving as the headmaster for what may be America’s most little known, yet heartwarming baseball weekend.

For the 15th consecutive year, his Travis Roy Foundation’s Wiffle ball tournament brought teams to its one-of-a-kind facility near Lake Champlain to raise money for spinal cord injury research. More than 400 players spread out over 32 teams will spend the weekend swinging plastic yellow bats on fields that could easily be mistaken for hallowed ground. 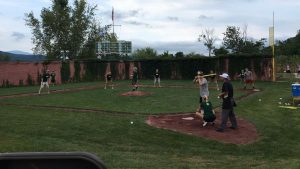 That’s because the Essex complex features fascinating to-scale replicas of Fenway Park, Wrigley Field and the “Field of Dreams,” from the iconic movie of the same name. The entire Wiffle ball tournament is played on these fields, meticulous in their design down to the last piece of brick ivy, to the final shine of the mini CITGO sign in left field. A hue of history hides in every miniature corner.

“It’s something that you see for the first time and think ‘Wait, can I put one of these in my backyard?'” said Bruce Bosley, who works for the Travis Roy Foundation. “You say, ‘Wow. Why didn’t I think of that?'”

Fenway has the Monster, the white netting atop it, the yellow home run line in center, everything. Wrigley has the brick and ivy, the vintage chalk scoreboard. The Field of Dreams is cloaked in cornstalks.

Yet the weekend’s central figure remains Roy, who started the foundation in 1997 after cracking his fourth and fifth vertebra in a horrific hockey accident two years prior. Roy was a freshman hockey player at Boston University in 1995 when he crashed into the boards 11 seconds into his first collegiate game. The collision paralyzed him instantly. Roy, now 41, has lived the rest of his life as a quadriplegic.

His foundation funds research in hopes to find a cure for spinal cord injuries, while also providing people with disabilities necessary equipment. The foundation raised more than $550,000 last year and nearly $3.5 million since its inception.

This weekend’s tournament figures to get the foundation close to its 2016 goal of $550,000 raised.

“There will be a cure for paralysis some day,” said Roy. “It’s taken longer than I’ve ever hoped and we still have a ways to go. But what we do here, we’re a little piece of that puzzle. It’s a pretty big puzzle. The research we fund plays a role. You just never know what the outcome is going to be.”

The tournament has grown in recent years with increased media exposure, aided by a popular YouTube highlight of an incredible home run-robbing catch from 2013.

Tournament mainstays include teams consisting of Roy’s extended family, New Jersey parole officers, Boston University hockey alumni and former Red Sox All-Star Bill Lee, who started Game 2 and Game 7 of the 1975 World Series, lives in Vermont and is running for governor of the state. He’s been a regular at the Travis Roy Foundation Tournament since its inaugural year.

“Everyone is out here playing with family and friends. It’s a nice night. You’re eating great homemade food,” said Lee. “It doesn’t get any better than this.”

The first night of this year’s tournament provided unique moments despite the steady drizzle threatening the night. Only here can you see Lee, who later told stories about facing Johnny Bench, pitching to a 6-year-old girl, then hitting a home run off her dad an inning later.

At this Wiffle ball weekend in the woods, with mountains draped behind center field, expectant mothers, Little Leaguers and former Boston Red Sox players can all play on the same field. All with an eye toward the same goal.

“There will be a generation that doesn’t have to deal with paralysis as we know it,” said Roy. “And I’ll be proud to be a part of it. I’ll be more proud when it comes to fruition.”