The Cervical Cord. The first and second cervical segments are special because they hold and pivot the head. The back of the head is called the Occiput. The first cervical vertebra, upon which the head is perched is sometimes called Atlas, after the Greek mythological figure who held up earth. The second cervical vertebra is called the Axis, upon which Atlas pivots. The interface between the occiput and the atlas is called the atlanto-occiput junction. The interface between the first and second vertebra is called the atlanto-axis junction. The C3-4 cord contains the phrenic nucleus. The cervical cord innervates the deltoids (C4), biceps (C4-5), wrist extensors (C6), triceps (C7), wrist extensors (C8), and hand muscles (C8-T1).

The Thoracic Cord. The thoracic vertebral segments are defined by those that have a rib. These vertebral segments are also very special because they form the back wall of the pulmonary cavity and the ribs. The spinal roots form the intercostal (between the ribs) nerves that run on the bottom side of the ribs and connect to the intercostal muscles and associated dermatomes.

A dermatome is a patch of skin that is innervated by a given spinal cord level. Figure 2 is taken from the ASIA classification manual, obtainable from the ASIA web site. Each dermatome has a specific point recommended for testing and shown in the figure. After injury, the dermatomes can expand or contract, depending on plasticity of the spinal cord. 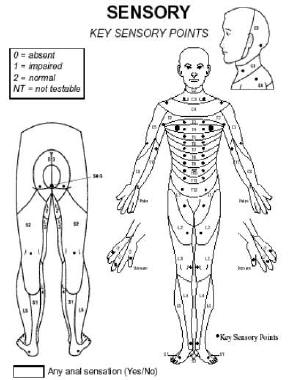 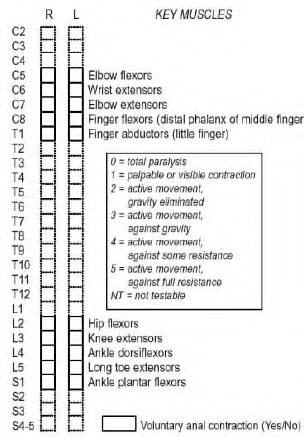 Figure 2. Sensory and motor segmentation
of the spinal cord. These are the dermatomes
and muscles recommended by the
American Spinal Injury Association.

T2 to T12. The thoracic covers the axillary and chest region. T3 to T12 covers the chest and back to the hip girdle. The nipples are situated in the middle of T4. T10 is situated at the umbilicus. T12 ends just above the hip girdle.

L1 to L5. The cutaneous dermatome representing the hip girdle and groin area is innervated by L1 spinal cord. L2 and 3 cover the front part of the thighs. L4 and L5 cover medial and lateral aspects of the lower leg.

S1 to S5. S1 covers the heel and the middle back of the leg. S2 covers the back of the thighs. S3 cover the medial side of the buttocks and S4-5 covers the perineal region. S5 is of course the lowest dermatome and represents the skin immediately at and adjacent to the anus.

Ten muscle groups represent the motor innervation by the cervical and lumbosacral spinal cord. The ASIA system does not include the abdominal muscles (i.e. T10-11) because the thoracic levels are much easier to determine from sensory levels. It also excludes certain muscles (e.g. hamstrings) because the segmental levels that innervate them are already represented by other muscles Arm and hand muscles. C5 represents the elbow flexors (biceps), C6 the wrist extensors, C7 the elbow extensors (triceps), C8 the finger flexors, and T1 the little finger abductor (outward movement of the pinky finger).

It important to note that the muscle groups specified in the ASIA classifications represent a gross over simplification of the situation. Almost every muscle received innervation from two or more segments.

In summary, the spinal cord segment serve specific motor and sensory regions of the body. The sensory regions are called dermatomes with each segment of the spinal cord innervating a particularly area of skin. The distribution of these dermatomes are relatively straightforward except on the limbs. In the arms, the cervical dermatomes C5 to T1 are arrayed from proximal radial (C5) to distal (C6-8) and proximal medial (T1). In the legs, the L1 to L5 dermatomes cover the front of the leg from proximal to distal while the sacral dermatomes cover the back of the leg.

Most clinicians commonly describe injuries as “complete” or “incomplete”. Traditionally, “complete” spinal cord injury means having no voluntary motor or conscious sensory function below the injury site. However, this definition is often difficult to apply. The following three example illustrate the weaknesses and ambiguity of the traditional definition. The ASIA committee considered these questions when it formulated the classification system for spinal cord injury in 1992.

• Recovery of function. A person may initially have no function below the injury level but recovers substantial motor or sensory function below the injury site. Was that person a “complete” spinal cord injury and became “complete”? This is not a trivial question because if one has a clinical trial that stipulates “complete” spinal cord injuries, a time must be stipulated for when the status was determined.

The decision to make the absence and presence of function at S4-5 the definition for “complete” injury not only resolved the problem of the zone of partial preservation but lateral preservation of function but it also resolved the issue of recovery of function. As it turns out, very few patients who have loss of S4/5 function recovered such function spontaneously. As shown in figure 3 below, while this simplifies the criterion for assessing whether an injury is “complete”, the ASIA classification committee decided that both motor and sensory levels should be expressed on each side separately, as well as the zone of partial preservation.

In the end, the whole issue of “complete” versus “incomplete” injury may be a moot issue. The absence of motor and sensory function below the injury site does not necessarily mean that there are no axons that cross the injury site. Many clinicians equate a “complete” spinal cord injury with the lack of axons crossing the injury site. However, much animal and clinical data suggest that an animal or person with no function below the injury site can recover some function when the spinal cord is reperfused (in the case of an arteriovenous malformation causing ischemia to the cord), decompressed (in the case of a spinal cord that is chronically compressed), or treated with a drug such as 4-aminopyridine. The labeling of a person as being “complete” or “incomplete”, in my opinion, should not be used to deny a person hope or therapy.

Clinicians have long used a clinical scale to grade severity of neurological loss. First devised at Stokes Manville before World War II and popularized by Frankel in the 1970’s, the original scoring approach segregated patients into five categories, i.e. no function (A), sensory only (B), some sensory and motor preservation (C), useful motor function (D), and normal (E).

The ASIA Impairment Scale is follows the Frankel scale but differs from the older scale in several important respects. First, instead of no function below the injury level, ASIA A is defined as a person with no motor or sensory function preserved in the sacral segments S4-S5. This definition is clear and unambiguous. ASIA B is essentially identical to Frankel B but adds the requirement of preserved sacral S4-S5 function. It should be noted that ASIA A and B classification depend entirely on a single observation, i.e. the preservation of motor and sensory function of S4-5. The ASIA scale also added quantitative criteria for C and D. The original Frankel scale asked clinicians to evaluate the usefulness of lower limb function. This not only introduced a subjective element to the scale but ignored arm and hand function in patients with cervical spinal cord injury. To get around this problem, ASIA stipulated that a patient would be an ASIA C if more than half of the muscles evaluated had a grade of less than 3/5. If not, the person was assigned to ASIA D.

ASIA E is of interest because it implies that somebody can have spinal cord injury without having any neurological deficits at least detectable on a neurological examination of this type. Also, the ASIA motor and sensory scoring may not be sensitive to subtle weakness, presence of spasticity, pain, and certain forms of dyesthesia that could be a result of spinal cord injury. Note that such a person would be categorized as an ASIA E.

These changes in the ASIA scale significantly improved the reliability and consistency of the classification. Although it was more logical, the new definition of “complete” injury does not necessarily mean that it better reflects injury severity. For example, is there any situation where a person could be an ASIA B and better off the ASIA C or even ASIA D?

The new ASIA A categorization turns out to be more predictive of prognosis than the previous definition where the presence of function several segments below the injury site but the absence of function below a given level could be interpreted as an “incomplete” spinal cord injury.

The ASIA committee also classified incomplete spinal cord injuries into five types. A central cord syndrome is associated with greater loss of upper limb function compared to the lower limbs. The Brown-Sequard syndrome results from a hemisection lesion of the spinal cord. Anterior cord syndrome occurs when the injury affects the anterior spinal tracts, including the vestibulospnal tract. Conus medullaris and cauda equina syndromes occur with damage to the conus or spinal roots of the cord.

Since our beginning in 1997, we have invested over $4M on spinal cord injury research.