The senior scored 19 goals to help the Red Storm reach the Class A final. 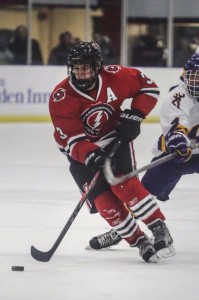 Caron is the first player from Scarborough High School to receive the award.

Named for Travis Roy, a former North Yarmouth Academy standout who was paralyzed 11 seconds into his first shift in his first hockey game at Boston University when he crashed into the board, the award is given annually to the top senior player in Class A hockey.

During his speech at the annual Class A Coaches awards banquet, Caron talked how Travis Roy had inspired him.

“This award is named for a man who has had to face a life-altering situation and has made something positive out of it,” he said. “For Travis Roy, the 11 seconds he played on the ice in his first college hockey game was a culmination of a lifelong dream and hard work … Travis had to figure who he was because he knew he wasn’t going to be a hockey player anymore. He’s turned a tragedy into a positive.”