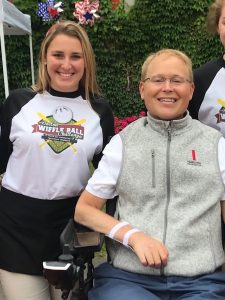 Boston Pride rookie, Sammy Davis is adding something unique to her daily workout routine.  To benefit the TRF, Sammy and her friend Jenna Seibold will be taking a dip in the frigid ocean near her home in Pembroke, MA for 24 days… IN DECEMBER!

Like Travis, Sammy Davis played hockey at Tabor Academy and was a NEPSGIHA First Team All-Star as a senior.  Sammy also served as an assistant captain for the US U18 Team and she won a gold medal at the 2015 IIHF Women’s World Championships.

For her college hockey career, Sammy chose Boston University.  She was a unanimous selection to the Hockey East All-Rookie Team and runner up for Rookie of the Year.  In her senior year, she led all Terriers in goals and assists, finishing her career with 66 goals and 76 assists for 142 points.

After graduating, Sammy was selected number one (1) overall by the Boston Pride in the 2020 National Women’s Hockey League (NWHL) Draft. While moving forward in her professional career, Sammy will also pursue her doctoral degree in occupational therapy from Mass General Hospital Institute of Health Professions.