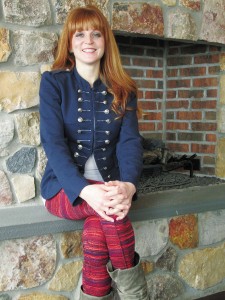 Gordonville, PA, resident Josi Hershey is preparing to run the Boston Marathon on Monday, April 21, to help raise funds for the Travis Roy Foundation, which provides research grants along with adaptive equipment for those living with spinal cord injuries.

Josi Hershey of Gordonville, PA, is a part-time hairdresser and full-time mom. For the last several months, however, she has sandwiched training for the Boston Marathon, which will take place on Monday, April 21, into her busy schedule, and she is doing it to raise money for the Travis Roy Foundation. “It has been such an honor to do it, and I am taking it step by step,” said Hershey. “Everything keeps working out.”

Hershey has always had an aptitude for running, beginning her long-distance career when she joined the cross-country team at Lancaster Mennonite High School. In 1999, she ran her first Boston Marathon, but after marrying her husband, Josh, in 2000, Hershey had the first of her three sons, and she was too busy to indulge in her hobby. “I didn’t run for 10 years because I was running after kids,” she said with a laugh. A few years ago, she rekindled her interest, running the Garden Spot Village half and full marathons during consecutive years.

She did not consider running for a cause until her three sons, all of whom play hockey with the Lancaster Firebirds, asked her about the worst hockey accident that had ever occurred. After a little research, she and the children discovered the story of Travis Roy, who was paralyzed by a freak accident only 11 seconds into his first collegiate hockey game, as a Boston University freshman. “We watched a video (about Travis Roy) on the computer, and the boys were silent,” said Hershey. “They were mesmerized.” So was Hershey, who purchased Roy’s book, “Eleven Seconds,” and sent him a four-page letter, including a “Jesus Is Calling” devotional. She has received emails from Roy thanking her for the letter and the text.

Roy’s foundation provides research grants along with adaptive equipment for those living with spinal cord injuries. In her letter, Hershey told Roy that she would be happy to run a Boston Marathon to help raise money for his foundation, and she began training to be part of a Travis Roy Foundation Team in the 2014 race. But before she qualified, the 2013 marathon tragedy occurred. Her husband and other family members became concerned about whether she should continue toward her goal. “I prayed about it, and I thought, ‘I’m doing it,'” said Hershey. “Once you get into running, and you have put effort in over a couple months, (you feel that you are not) going to give up. I felt it was what God wanted me to do.”

In Sept. 2013, Hershey qualified for the Boston Marathon at an Allentown event and became the first 2014 team member. She set a goal of raising $7,500 for the Travis Roy Foundation and began fundraising. She gave free haircuts at her church, Freedom Life Christian Center in Christiana, and at the ice rink. “At the rink, a lot of people know Travis’ story, so they’re very generous,” she stated. She has also sold peanut butter eggs.

Although Hershey’s training schedule is cutting into her free time (she recently hit the treadmill at 5:45 a.m. on a Sunday so running would not interfere with a family function that day), she believes that her efforts are setting a good example for her sons. “I think it’s a great opportunity to show children that when you have a goal and you put your mind to it, (you can achieve it),” she said. “I hope they see a lot of good through that.” She credits God with the willpower to keep going even when the training is tough. “It’s really neat to see how (God) is working through me and giving me the strength to run when I don’t feel like it,” she said. “I give Him the glory for that.”