It is with profound sadness that we acknowledge the passing of Travis’ dear friend Jack Shadduck of Braintree at the age of only 33.  Jack was sadly paralyzed as a result of a rare neurological condition when he was only 13 years old. He and Travis became close friends when he was the captain of the Jackhammers in our WIFFLE Ball tournament in Essex, VT.  Jack and his family had an amazing circle of supportive family and friends who came together to help Jack thrive even from his wheelchair.  That group of friends came together to form the Jackhammers WIFFLE ball team and they became a constant and enthusiastic presence in our tournament.  The Jackhammers won the tournament in 2008, 2012 and 2015. 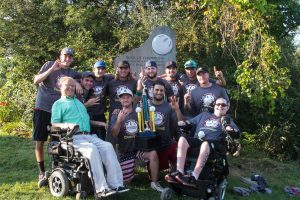 “Through all the years the Jackhammers were at the tournament we were privileged to witness the transformation of Jack the young boy dealt a tough hand to Jack the adult crafting his own unique full future,” offered a long-time member of our WIFFLE tournament volunteer group.  She continued, “just as Travis had been an inspiration & mentor, Jack migrated into that role for others.  His humor and enthusiasm was always a bright spot in the weekend and beyond.  I pray he and Travis are gliding through the heavens with wild abandon!”

Jack lived a full life after the onset of his paralysis including becoming a comedian. And Travis was excited to add him to the program at our comedy event in 2019 that featured other TRF comedian friends, Bill Burr and Tommy O’Regan.

To learn more about Jack’s life and his wonderful family and friends, please see this obituary from the Patriot Ledger.

To commemorate Jack and his friendship with Travis, the Trustees of the TRF have dedicated our Quality of Life Grants for January in Jack’s name. In that month, we donated over $90K to 28 survivors of spinal cord injuries.  It is a small but important tribute to the life of such a courageous young man.

Thank you Jack and the entire Shadduck family for your friendship and support of our common case – to help those living with paralysis live more independent and hopeful lives.