Reflecting on the Best Weekend of the Year 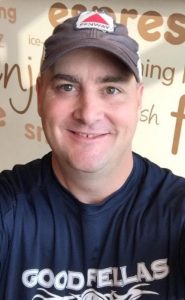 As I arrived back to my home, a short 20 minute drive from the playing fields, I sat for a few moments in silence to gather my thoughts. After spending the better part of 14 hours each day from Friday through Sunday talking to players and fans in between announcing games and even playing in some of them, I needed to just be by myself for a few minutes to let everything that just happened finally sink in. Then it all hit me and I was overcome with both a sense of joy and accomplishment. The Travis Roy Foundation WIFFLE® Ball Tournament has a way of doing that – sneaking up on you and hitting you right in the feels.

As a member of the steering committee I see this event unfold from start to finish. As an announcer during the games I get to watch the games play out. As a player on one of the teams I understand the highs and lows of winning and losing. I see it all, well almost all, so when I tell you this next bit I like to think I have some amount of authority on it.

On Thursday I met a team from Alabama – well to be honest, the players were mostly from Alabama, but some came from Texas, Tennessee, and some other places down south. The Alabama Yellowhammers team was a group of guys that saw Travis’ ESPN video and felt they had to be a part of the event. They showed up a day early, went straight to the fields for a little practice, and then showed up at the 1st Republic Brewery fundraising event to meet Travis. They came into the small bar room as a group of friends, but as strangers to the rest of us there. Two hours later the talk of the night was all about what a great group of guys they were. On Friday when they showed up and played in their first game, people came to watch just to see who these southern boys were. By the time the money count rolled around on Saturday afternoon, the sound system was pumping out “Sweet Home Alabama” and the entire league was giving them a standing ovation. They didn’t raise the most money or win the most games, but they certainly reeled in the most fans. There’s a sign over the front door of my home that reads, “Enter as strangers, Leave as friends”. The Alabama Yellowhammers certainly did just that.

On Sunday I sat to announce what was about to be the 12th game I would lend my voice to and a young boy named Abraham Alexander approached me. He had on a nice suit jacket, clean pants, a fedora, and the biggest smile you have ever seen. He asked if he could announce a name or two as his father was playing in the game about to start. This entire event is run by volunteers, so to have one this young come out of the stands willing to give work just further shows me this event may never run out of help. As he sat in my chair, his voice was soft and uncertain as the first batter stepped to the plate. With each new batter coming to the plate though his voice got louder. After every play his words became steadier. And when his father Chuck Alexander came to the plate his personality flowed from the microphone to the entire audience. I let him call the entire first inning and warned his as he got up from the chair, his chair now, that he may have just signed himself up for years of work. He shook my hand and said, “I would love that”. Something tells me everyone would love that too.

These are just two of the dozens of things that amazed me this past weekend. There was so much more. 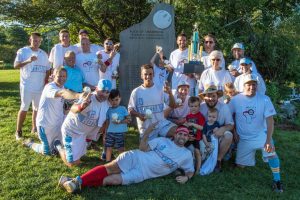 I saw Keith Carter of Cougar Nation pitch into the playoffs before allowing a single run. Amazing, right? Even more amazing, and what most didn’t know was that he did that with a torn hamstring. Trying to raise an additional $50 towards his fundraising goal just days before the tournament, Carter entered a race around some bases with his teammates and came up in pain rounding second base. The backside of his entire right thigh was taped and covered hiding the deep purple bruise.

I watched team after team display amazing sportsmanship. Jimmy Cole of the Juggernauts made sure that a young lady playing with the Docksiders got a homerum. I saw Tawny Palmieri of Killin Me Smalls let a young boy named Eric walk on to her team from the stands and play. She was rewarded by him making an amazing play in the field and then crushing a homerun at the plate. She made a friend and found a new teammate there. I saw the Staten Island Yankees play the Buckners without a care in the world of what the scoreboard said. They posed for a group photo, swapped jerseys, and laughed the entire game. Two of the most competitive teams in the league, once removed from playoff contention, turned into a group of boys just out to have some fun.

Then at that very same Yankees and Buckners game, I saw a miracle. OK, maybe not a miracle, but certainly a sign that Tommy Long was watching over the tournament still. Tommy was part of the original team to play back when this all started in 2002. He is gone now but his memory lives on in his teammates, his sons who play, and now his grandson who was there to cheer for his father. The memory is brought to the forefront every game the Staten Island Yankees play in when Vincent Trimarco, a right handed hitter, steps to the plate to start a game and walks to the left side to bat in honor of Tommy Long. He does it every game, no matter the importance of the win. Honoring a friend and family member outweighs any amount of competition. But this year, in this game, Trimarco put a little yellow bat on a funny looking white ball and smashed it over the fence. A leadoff homerun has never been celebrated more. Not just by the Yankees either, but by both teams, by every fan, and by every volunteer around me at the announcers table. Rob Young and Carney Daniels could not have been happier to see a ball leave the yard against their team. How Joe Tirone held back the tears, I still don’t know. In that moment, everyone at that game got to share in a little piece of history and happiness.

The event is put on every year to raise awareness and funds for people living with a spinal cord injury. In its most base form, it’s a fundraiser. In reality, however, it’s a life changing event. A life changing event with family and friends, food and WIFFLE® ball, and there are even awards.

Plaques were handed out, pictures were taken, and high fives were everywhere. Then I drove home and sat in the silence letting the feels just hit me. My final thought before I laid down to sleep that night was of one thing – Travis Roy. I thought of how incredible he is and how much he means to so many of us. I thought of how he couldn’t just drive himself home and get into bed alone. I thought of how I could do more to help his foundation. I thought and I fell into a deep sleep. Today I woke and I wrote all this down to share with you and tomorrow I will start fundraising for 2018 because I can do more. Travis is my hero, plain and simple. His wheelchair might as well be a cape.

Thank you all for donating, playing, volunteering, laughing, hugging, sharing, and being a part of this event every year. I look forward to next year already.