NASHUA, N.H. —On the frozen streets around the Nashua area, look for Briana Beauchesne, 42, of Merrimack, and her dog, Teddy. They are training for the Boston Marathon. 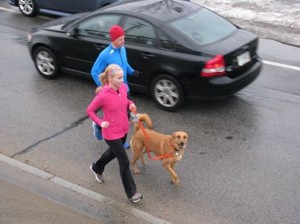 On the frozen streets around the Nashua area, look for Briana Beauchesne, 42, of Merrimack, and her dog Teddy.
WMUR/Paula Tracy

She, like 560 other registered New Hampshire runners, is trying to negotiate snow-bound streets with cars, preparing for April 21. Please share the road with these folks in the next few weeks.

Beauchesne is running her third marathon but her first at Boston, which she considers “The Holy Grail” of marathons.

“I am still in a state of surreal shock,” she said Wednesday as she prepared to take a run with WMUR sports director Jamie Staton in Manchester.

He is also running the BAA’s classic event, which was marred by tragedy and a violent assault on Boston last year. Both were near the site of the blast (Beauchesne was running, while Staton was covering the event). Both were runners who are over the moon about getting bibs for 2014.