A man from Orrington is defying the odds by running the Boston Marathon.

Around 30,000 people race each year, but how many of them have broken their neck?

“My buddies thought I was gonna die on the spot. I’ve never been so cold, so white in my entire life,” said Joe. 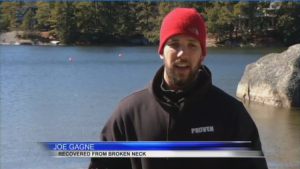 Two years ago, Joe broke his neck after diving into shallow water and hitting his head on a rock on Phillips Lake in Dedham.

“They said about nine times out of ten, people who suffer my injury are dead or paralyzed from the chest down,” he said.

“I broke my C6th and C7th vertebrae, and they said if I wasn’t in such good shape or my neck wasn’t so strong, it easily would’ve just snapped it right in half,” said Joe.

“I was just like, ‘Oh, he’s just got a concussion.’ And it was pretty tough to see him in that situation where I’d always seen him as a pretty strong character,” said Ryan Gagne, Joe’s younger brother.

But Joe’s recovery has been fairly easy for an injury so severe. He’s hit the ground running – literally.

Joe is training for his first marathon – the Boston Marathon.

He’s running for Travis Roy, a promising hockey hopeful in 1995. Roy was just a college freshman at Boston University who became paralyzed 11 seconds into his first game.

“We wanted to do something that would really mean something and it was just a no-brainer to select and apply for the Travis Roy Foundation.”

Joe doesn’t have a qualifying time for the race, so he’s fundraising and running for the foundation.

He says it’s a second chance at life’ a life he says he owes to his friends that saved him.

“You can’t just be as comfortable as you think you can be and, you know, anything can happen,” said Joe.

If you’d like to help Joe get to the Boston Marathon in April, you can donate to his CrowdRise page here.

All of the proceeds go to the Travis Roy Foundation that helps spinal cord injury survivors and funds research for a cure.