The evening was emceed by Meredith Vieira and it raised $1 million to serve the millions of people who are living with paralysis. There were many notable celebrities in attendance including Zac Williams, son of the late Robin Williams, as they held a special tribute to Robin for his support of the Reeve Foundation. 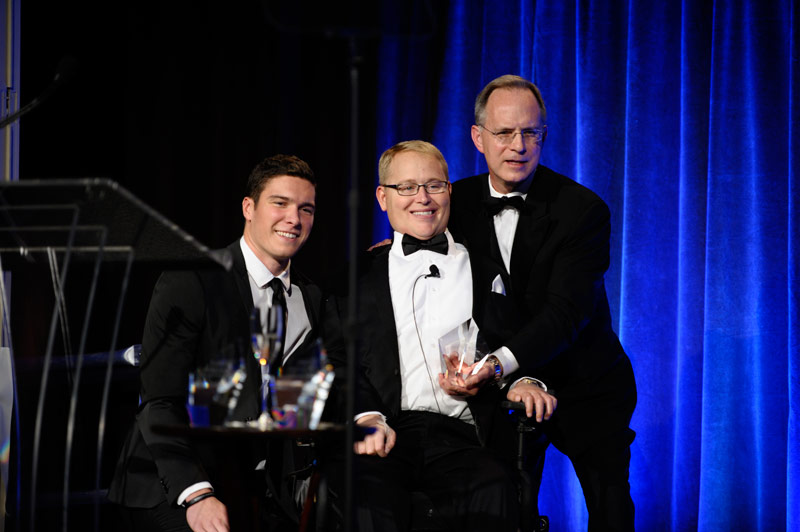 Will Reeve, son of Christopher and Dana Reeve, offered these kind remarks while introducing Travis:

“I think courage manifests itself in obvious ways like facing a fear or standing up for what you believe in, even when it’s unpopular. But courage runs so much deeper than that. There is a nuance to the idea of courage that appears in places like cold rinks in Maine; in the early mornings a world away from hockey stardom. But intently connected to it by a dream. It takes courage to follow that dream. It takes courage to write out three specific goals: (1) earn a college hockey scholarship, (2) sign a National Hockey League contract, (3) make the US Olympic Hockey Team; and fight like hell despite your naysayers and fear of failure. It then takes a special kind of courage, the courage of a true hero when your dream is taken from you 11 seconds into your first college game, to say to your father as he knelt beside you on the ice, “I made it”. Travis Roy made it! He had the courage to succeed when many told him he could not. He had the courage to accept his new life-changing challenge and make a difference. He has the courage to help others when no one would fault him for helping only himself. He has the courage to dedicate his life to the Travis Roy Foundation, which has given million dollars in grants to spinal cord research and quality of life organizations; including more than $400k to the Reeve Foundation.”

It was a certainly ‘a magical evening’ for Travis, his family, and the Travis Roy Foundation.

Travis captivated those attending with words that brought people to their feet. “In receiving the Christopher Reeve Spirit of Courage Award, I can tell you my courage has come from my mom, my dad, my sister, my brother in law, my nieces, my nephew, from my friends, and from strangers alike. My courage has come from the thousands of people that have written 20, 50, and $100 checks to the Travis Roy Foundation.”

“The Travis Roy Foundation has helped me to transition my life from one full of passion back when I was a hockey player, to one full of purpose. In fact for the 1st time in nearly 19 years since my injury I’ve felt a sense of passion return, and merge with my purpose to help others with spinal cord injuries and to fund hope. More than anything, my courage has been fueled by hope, my hope that someday I will regain significant pieces of my independence back.”

“I receive this award tonight on behalf of everyone that has supported me and the work of the Travis Roy Foundation. I may be the front man, but my success has come from all of you. You’ve helped give me a life that is every bit worth living. A life that has purpose, quality, and happiness.”

Watch Travis’ speech and the opening remarks from Will Reeve and David Barger, CEO of JetBlue, by following this link to the Travis Roy Foundation YouTube channel: http://youtu.be/YXmVpZ8ai5o