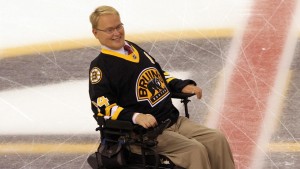 Travis Roy is now a member of the Bruins.

The Bruins signed the former BU hockey player to a one-day contract on Monday as the team honored him on the ice before a matinee against Tampa.

This month marks the 20th anniversary of the on-ice injury that left Roy paralyzed as a BU freshman.

The Bruins also made a $50,000 donation to the Travis Roy Foundation, which aims to help those dealing with spinal cord injuries.