BOSTON —Travis Roy’s story isn’t about the 11 seconds that changed his life. It’s about what he has done since.

On Oct. 20, 1995, as a 20-year-old freshman playing hockey at Boston University, Roy went crashing headfirst into the boards on his first collegiate shift. He suffered a cracked fourth vertebra that left him paralyzed from the neck down.

It has been 20 years since the accident.

“It’s an interesting period. For the first five to seven years, there was a lot of attention around my story and I didn’t really feel like I’d earned it,” said Roy, now 40. “I basically had a freak injury and it was unfortunate.”

After a year of intense rehabilitation, Roy returned as a quadriplegic to BU and four years later graduated with a degree in public relations. In 1997, he founded the Travis Roy Foundation and has since raised millions of dollars for research and medical assistance to help those with spinal-cord injuries. 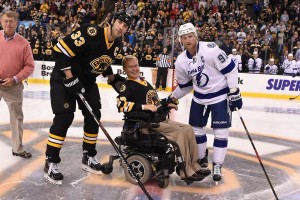 “I tell people I live in Boston, and I just feel like everybody is rooting for me,” Roy said. “Not only for me, but they’ve been extremely generous to make the foundation a success as well. So, it’s been a long road. There are highs, there are lows, but there’s been a heck of a lot more highs than I ever thought, and far fewer lows than I ever expected. I’m just feeling grateful.”

Langevin, 51, is the first quadriplegic to serve in the U.S. House of Representatives. When he was 16, he was participating in a Boy Scout Explorer program at the Warwick, Rhode Island, Police Department when a gun accidentally went off and a bullet struck him. He was paralyzed.

Roy and Langevin have never met, but they’ve talked on several occasions because they have the same goal of finding a cure for spinal-cord-related injuries.

“I applaud him for his efforts. I applaud him for his courage. His story is so tragic and courageous all rolled into one,” Langevin said. “He’s a guy that maybe I can relate to. He had a tough break, but he hasn’t let it stand in his way of setting new goals, new dreams and finding an important purpose in life where he’s making a difference. He’s a kindred spirit in many ways.”

When Langevin was injured 35 years ago, doctors told him he would never walk again because it’s too difficult to repair the spinal cord. Today, researchers agree there’s hope on the horizon.

Countless people are grateful for Roy’s work and advocacy. He’s making a difference in the lives of those with spinal-cord injuries, and he’s determined to improve their independence and quality of life.

Langevin explained that it is not cheap, from a quality-of-life standpoint, to be disabled. Whether it’s computer-related equipment, an electric wheelchair or components for an accessible vehicle, most of these items are not covered by insurance, so the monies raised by the Travis Roy Foundation are making lives better.

“It can mean a world of difference to people who need it,” Langevin said.

So, Travis Roy provides it.

“To date, the foundation has raised over $6 million,” Roy said. “We have funded a number of cutting-edge research labs around the country. We’ve helped over a thousand individuals with wheelchairs, with voice-activated computers. Now, I feel the attention towards the foundation and my life is a little more warranted. I feel better about it, which is just nice. I’m proud of the work we’ve done, proud of the community.”

“The fact that Travis is out there raising private dollars for this effort is so meaningful and powerful. I’m grateful for his efforts,” Langevin said.

Roy believes the research has come a long way in the 20 years since his injury. He’s also excited about the next 10 years and what it could mean when that research finally moves out of the labs and into human trials in the hopes of finally making those therapies mainstream.

“I was kind of hoping in five to 10 years that there would be some big breakthroughs and my life would physically be a little bit different, a little more independent,” he said. “It’s taken a while. I feel like I’ve said it year after year, but there is excitement coming out of the lab. We’re funding a study in Louisville called ‘The Big Idea’ and it’s into patients and it’s exciting. There are a number of studies that are moving from the lab to clinical trials, and that’s big step — a huge step.

“We’re probably another 10 years or so away from having mainstream therapies that are out to everybody, but we’re finally getting there. I live on hope. I mean, hope gets me out of bed in the morning. But hope needs to be funded.”

Roy also isn’t afraid to speak out on the involvement of politics and how, for example, the economy and the war in Iraq had caused significant resources to be allocated to elsewhere other than to research.

“The budget for the National Institute for Health got slashed. It was tough to know that there were some lean years there and things really got put on the back burner,” Roy said. “We’re getting there, though. When the economy is good, the more research gets funded.”

Langevin explained that there is $7 billion allocated by the Department of Defense for medical research, including for breast cancer, Parkinson’s disease, traumatic brain injuries and spinal-cord research.

While Roy believes government funding is picking up speed once again, Langevin agreed more can be done.

“Until we find a cure for spinal-cord injuries, I will be of the mind that we could always use more,” Langevin said. “I can’t thank Travis enough for lending his voice and efforts and raising funds that go to the quality of life side, and also to raise research dollars. I believe it’s no longer a question of ‘if,’ but ‘when’ we find a cure for spinal-cord injuries, and simply because of efforts like Travis is undertaking to get us there.” 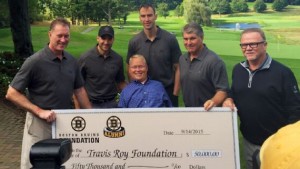 Roy is eternally grateful for all those who have helped his cause for the past 20 years, including the Boston Bruins. The organization recently donated $50,000 to the Travis Roy Foundation.

“The Bruins have just been incredible. The hockey family has been pretty special,” Roy said. “The Bruins, over the years, have made some significant donations to the Travis Roy Foundation. I can’t believe it’s been 20 years since my injury, but the Bruins were there Day 1. I remember Ray Bourque being at my bedside. I remember Bobby Orr.

“They did everything they could to help support me, get me headed in the right direction and help me raise some money that has played a big impact in my life early on, but now raising money for the Travis Roy Foundation. The Jacobs family has been so incredible and I’m just grateful.”

Bruins assistant captain Patrice Bergeron suffered a serious neck and head injury when Philadelphia Flyers’ Randy Jones hit Bergeron from behind and sent him flying into the boards headfirst on Oct. 27, 2007, at TD Garden. He missed the remainder of that season, and the injuries nearly ended his career. Partly, but not only, because of that incident, Bergeron has always been honored to know and help the likes of Travis Roy and others who suffered spinal-cord injuries.

“A guy like Travis is someone we all look up to,” Bergeron said. “The way that he’s handled himself with what happened, he’s always wanted to make a difference in the community.”

Recently, the Bruins signed Roy to a one-day contract and honored him in a pregame ceremony. He participated in a ceremonial puck drop with Bruins captain Zdeno Chara and Tampa Bay Lightning captain Steven Stamkos.

“It’s been 20 years since my injury, and my guess is the majority of this team was 4, 5, 6 years old back then,” Roy said with a laugh. “It does put things into perspective and not in a way that puts a smile on my face.”

It wasn’t an ordinary pregame ceremony, and Stamkos understood that. After he shook hands with Roy and before he skated back to the bench, Stamkos gave Roy a huge pat on the back.

“That was special,” Stamkos said. “To see what he went through, and what the Bruins organization has done for him was pretty special. It was something that you love to see, and it was nice to be a part of.”

Hockey has been a lifelong love for Roy. It may have altered his life, but those 11 seconds from 20 years ago have made more of an impact on others than Roy could have ever known while he was motionless on the ice.