A Bond Beyond the Rink

It was late October, the home opener of the 1995-1996 season at Walter Brown Arena. The National Championship banner from last season would be raised to the rafters that evening and the boys in scarlet and white would play in front of a rowdy, sellout crowd, excited to begin the season. For one freshman on the ice it was the fulfillment of a dream; standing at the blue line hearing his nation’s anthem with pounding excitement in his heart and the sound of the crowd as he buckled up his helmet and took the ice. Eleven seconds into his first college hockey shift, Travis Roy, a freshman out of small town Yarmouth, Maine would go head first into the boards, cracking his fourth and fifth vertebrae leaving him paralyzed from the neck down.

It was mid-December in 2002 at Appleton Arena in Canton, NY when the St. Lawrence Saints faced Lake Superior. Allie Skelley, a junior and assistant captain of the Saints, was behind the net in the offensive zone making a move towards the net when he got hit from behind and went head first into the boards. He felt spasming throughout his neck and lower back, but was able to will himself to the bench. He even tried to go out for another shift until the team trainers talked him out of it. He was rushed to Fletcher Allen hospital in Burlington, VT where he learned that he had fractured his sixth and seventh vertebrae. The small town kid from Wolfeboro, NH would gain full mobility, but would never be able to play contact sports, including hockey, again. 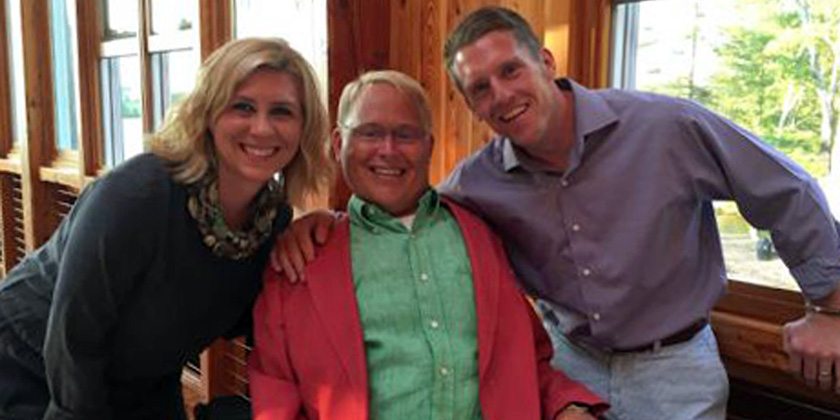 Allie Skelley and wife Stefanie with Travis at the Salisbury School in Connecticut.

Yet, this isn’t just a story about “what ifs” and the loss of a dream. It is instead a story of a friendship forged in an understanding of how thin the line can be between walking away, and not, from an injury, and the search for identity when the skates come off.  Every hockey player faces this moment. For the lucky ones, it comes after a long career and a departure on their own terms. For Travis and Allie,  both with potential of playing hockey beyond college, would see their careers end in similar fashion. It wasn’t a coach or a scout that told them they weren’t good enough and had to hang it up.  It was a doctor saying their bodies could no longer function in the capacity that would allow them to be the athletes they had been up to that point.

Perhaps it was the similarity of their stories before their accidents that drew Travis and Allie together. They were both blonde-haired kids from small towns in New England. Both of their mothers were in education and their fathers were coaches. They both attended boarding schools and played multiple sports. Travis played varsity hockey, soccer and lacrosse at Tabor and Allie was being recruited by colleges in football, baseball and hockey out of Phillips Exeter. They both accomplished their dreams of playing Division 1 College Hockey and had their sites set on the next level.

Sitting in his hospital bed, learning about his injury, and trying to adapt to life after the accident, Allie was handed the book, Eleven Seconds, the autobiography of Travis Roy. A book that gave him both the hope and strength to return to school and graduate without the familiar identity of being a hockey player.

After graduating, Allie accepted a position at Holderness School and has gone on to develop several high-end prospects like Jeff Silengo (UNH/ECHL), Steven Anthony  (ECHL/AHL), Gavin Bayreuther (St. Lawrence) and NHL Draft pick Terrance Amerosa (Clarkson). At Holderness, Allie also coached Travis Roy’s cousin (Neutral Zone’s Director of Scouting Brendan Collins). In 2006, he would participate with Brendan and a team from Holderness in the Travis Roy Foundation Wiffleball Tournament and meet Travis for the first time. This marked the beginning of a decade-long friendship between the two.  “After I physically had recovered from my injury I struggled mentally to figure out how to move on,” admitted Skelley.  “I was constantly looking for my next passion, something that I felt strongly about and something that would give me the opportunity to make a difference.  I found all of this and more when I was introduced to Travis and his foundation.”

Allie appreciates how fortunate he was to walk away from his injury, and each day wishes his friend Travis will have the same opportunity.  It is for this reason that he pushes his body to its limits as a way to bring awareness and raise funds for the Travis Roy Foundation, understanding that every step he is able to take is one he is lucky to have and one that he wishes Travis could take with him. “I was within fractions of an inch from living the rest of my life in a chair and I will never forget that. I got lucky for some reason and was spared, so I’m going to make the most of what my body will allow me to do.” A year after the horrifying bombing that took place near the finish line, Allie Skelley ran the Boston marathon in honor of Travis and raised over $10,000 for the Travis Roy Foundation. This past weekend Allie became the first person ever to paddle board from one side of Lake Winnipesauke to the other, an 18-mile journey that took Allie only 4.5 hours to complete and raised over $5,000 for the Travis Roy Foundation in the process.

In August of every year the two re-unite at the Travis Roy Foundation Wiffleball tournament in Jericho, VT. A small town that is just like the ones they grew up in, where you travel down miles of dirt road to a house in the country that has a replica Fenway Park and Wrigley Field in its backyard. Thirty-two teams will come from all over the country for a chance to raise money, compete for the title and most importantly celebrate Travis and his life. The tournament raises over $500,000 per year and while it is Allie’s favorite weekend of the summer, it’s also a reminder of how close he came to being in that chair. It’s almost as if Allie is playing for Travis, rounding the bases and making plays as Travis would have done if he could. For Travis, watching Allie is like looking in the future he envisioned for himself- seeing a coach, a father, an athlete competing just as he wishes he could.

The determination that made them great players can be seen in all that Allie and Travis do.  Neither is passively accepting their limitations, but fighting within their ability to push medical science towards a cure and improving the lives of others facing similar injuries. Despite never having the opportunity to be teammates on the ice, Travis sees Allie as a member of his foundation team raising funds to support medical research and fighting to create and provide opportunities for others who have suffered spinal cord injuries. “I’ve met so many great people through the work of the Travis Roy Foundation, but Allie is one of the most intense fundraisers I have ever seen,” said Roy. “Between running the Boston Marathon on behalf of the Foundation, or his recent accomplishment of paddle boarding 18 miles across Lake Winnipesaukee, he definitely challenges himself, along with those around him to support his fundraising effort. I feel so grateful to have Allie as a friend and a supporter of the Travis Roy Foundation.”

Both men also share an equal admiration for the sport of hockey, which provided such joy, and grapple with the heartbreak of what could have been. Yet, ultimately finding a comfort in knowing that because of the game, they are not alone. Hockey players understand that there is more to this game than executing that perfect breakout pass or scoring the game-winning goal. The beauty of hockey, regardless of what level a player achieves, is found in those small moments; the feeling you get stepping on the ice with your best friends, the sound of your blade as you stride towards the puck, the way your lungs and legs burn after a hard shift that brings a joy you can’t describe to others who don’t play the game, and that sense of belonging you feel in a rink with others that appreciate these same moments. While our work requires us to focus on evaluations and analytics, it is these moments that drive a deep respect for the game and its athletes and ultimately fuels our work here at Neutral Zone.

Neutral Zone is celebrating Travis Roy Week, where we will be donating 24% of all subscriptions this week to the Travis Roy Foundation in honor of Travis’ jersey number. Coaches, scouts, players and hockey families can also donate directly to Allie’s fundraising page by clicking here.